Full Moon Features’ Puppet Master franchise continues with the upcoming Puppet Master: Axis Termination, their ‘other’ series, Killjoy, also has a new instalment on the way. With a TV premiere date of October 30th, Killjoy’s Psycho Circus now has this cool, colourful trailer.

Psycho Circus is the fifth entry in the straight-to-video series that began with 2000’s Killjoy. Troma alum Trent Haaga returns to play the demon clown of the title for the fourth time, having taken up the mantle for 2002’s Killjoy 2: Deliverance From Evil. Haaga stars alongside fellow series regulars Victoria Da Mare as Batty Boop, Al Burke as Punchy, Tai Chan Ngo as Freakshow and Stephen Cardwell as Beelzebub.

It is the third consecutive Killjoy flick to have been both written and directed by John Lechago, following Killjoy 3 (2010) and 2012’s Killer Clown. 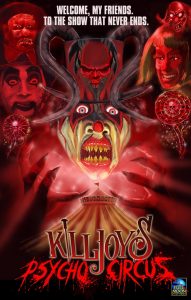 This chunky synopsis reveals more of the overtly (and wisely) comedic direction the series took from Killjoy 3:
Killjoy, the demon of vengeance, trickster god and killer clown has finally made it to Earth! Along with his gruesome crew Freakshow, Punchy and the sexy/psychotic Batty Boop, Killjoy is free to terrorise mortals in new and excruciating ways. But two years down the road Killjoy discovers that life on Earth is a drag, filled with inconveniences such as eating, breathing, taxes and immigration issues. His crew has left for other jobs, and Batty Boop has gone her own way after a bitter lover’s quarrel. Not to mention that Killjoy is now semi-mortal! Meanwhile, back in hell, Beelzebub is on trial for letting Killjoy escape. The only way that Beelzebub can redeem himself is to trap Killjoy’s spirit and bring it back in a box. For this mission he is granted a monumental spaceship capable of destroying entire cities! Killjoy has finally settled in, starring in his own web series called Psycho Circus, as well as running a movie and merchandise company with the notorious Hambo the Ranch Hand… 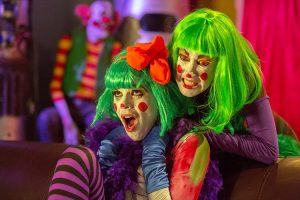 Killjoy’s Psycho Circus will premiere on the El Rey Network on October 30th, concluding their Killjoy series marathon. No news yet on a worldwide release.