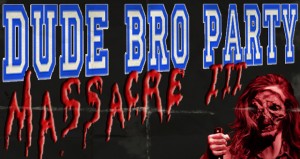 You might remember not that long ago we brought you the first trailer for Dude Bro Party Massacre III, which was full of hilarious bro-moments and lashings of blood. The horror comedy has come back with an even better trailer, full of more ridiculous dude jokes and exaggerated yet brilliant gore.

Dude Bro Party Massacre III is a tongue-in-cheek comedy horror presented as a 1980s VHS horror and pays homage to the gory and sexually fuelled slashers of that time. Tomm Jacobsen, Michael Rousselet and Jon Salmon will direct the film from a screenplay written by Alec Owen. Some famous faces are seen throughout including Patton Oswalt, Greg Sestero, Nina Hartley, Andrew W.K., John Francis Daley and Larry King.

Dude Bro Party Massacre III will debut at L.A. Film Festival on June 13th 2015. We’ll keep you updated to as when you will be able to see the film.

Synopsis:
After two mass murders on one of the most notorious fraternity rows, outcast Brent has to infiltrate the ranks of a popular fraternity in order to investigate his twin brother’s murder. As he delves deeper in the world of dudes, he must find out how to stop the infamous and deadly Motherface.