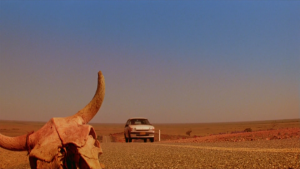 As we await the release of Chris Sun’s awesome-looking Boar, Umbrella Entertainment are bringing us the original Aussie giant-boar-goes-mental gem, 1984’s Razorback. Australian company Umbrella are releasing the film on blu-ray on August 1st, and have released details of the special features.

As well as a bunch of interviews, commentaries etc, the package contains the fabled longer, gorier cut of the film only ever released on the original Australian VHS. This is very exciting news for fans of Russell Mulcahy’s Ozploitation classic. The first 40 pre-orders will also contain a book of Razorback matches! Read on for the full list of special features.

Razorback is a beautifully shot feature with a striking colour palette, that drinks in the outback scenery, and it promises to look absolutely beautiful in this brand new 4K restoration.