FROM A BUICK 8 ADAPTATION FINALLY HAPPENING

From a Buick 8 holds the distinction of being one of the few Stephen King novels that hasn’t been adapted for film—or at least, it used to. A film version is currently in the works from Renegade Entertainment, an LA-based content company formed by actor Thomas Jane and producer Courtney Lauren Penn, which has partnered with King to adapt and produce his 2002 horror novel. 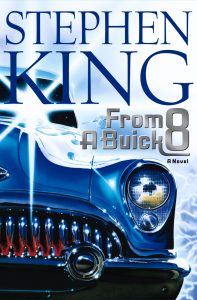 From a Buick 8 is set in rural Pennsylvania and centers around a car, which appears to be a 1954 Buick Roadmaster, that has sat in a shed behind the State Police barracks for decades. But when the son of a deceased trooper visits the barracks, it becomes clear that the “car” isn’t what it seems—and may be responsible for the strange disappearances and supernatural events that plague the town.

There have been numerous attempts to adapt the novel over the years, with George Romero (Night of the Living Dead) attached to direct. Jane, of course, is no stranger to the world of Stephen King, having previously starred in The Mist, 1922, and Dreamcatcher.