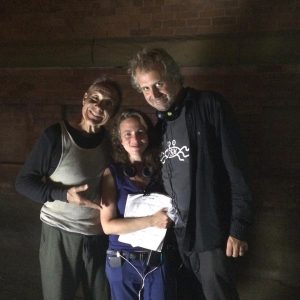 Once every blue moon, a first-timer’s feature is accepted at Cannes Film Festival. It’s actually probably a heck of a lot less often than that but, case in point, the festival organisers saw something special in writer/director Michael O’Shea’s debut The Transfiguration and there it was, screening as part of the Un Certain Regard strand.

Boasting an impressive and extensive cast including the likes of Eric Ruffin, Chloe Levine, Aaron Moten, Carter Redwood, Danny Flaherty, Larry Fessenden and Lloyd Kaufman, O’Shea’s atmospheric thriller follows the trials and tribulations of teen Milo who is constantly bullied at school and seeks solace in his particularly unorthodox passion for vampire lore.

With The Transfiguration having just wooed audiences at the Horror Channel FrightFest strand of this year’s Glasgow Film Festival, SCREAM’s Howard Gorman caught up with O’Shea to talk all about his chilling, blood-sucking spin on millenial angst…

SCREAM: I remember a few headlines asking who on earth was this Michael O’Shea first-timer chap when The Transfiguration was announced as part of the Cannes lineup as it was virtually unheard of for a filmmaker to get their directorial debut accepted there. Tell us a little bit about your background as I understand it was quite the journey getting here.

Michael O’Shea: I’m not that young and I graduated from film school about 20 years ago but I ended up working in other lines of work that still let me do creative things. I’ve been a cab driver and a nightclub doorman and then I ended up working as a freelancer fixing computers for rich people. It was my girlfriend, who is a film producer, and who produced The Transfiguration, that brought me back into this world. All of the time that I had been working in these other jobs, I had been working on scripts.

So I eventually prepared a concept short film and look book to show people and after about a year and a half of hearing people saying “No thanks,” someone said yes and that was it.

SCREAM: You submitted The Transfiguration for Cannes on a bit of a whim because you had missed the deadline for a couple of other festivals.

That’s right. Basically, we had missed SXSW and Sundance so we submitted the film to Cannes and when I heard the announcement and the festival called it Michael O’Shea’s “Vampire Saga,” that was “almost” the happiest moment of my life. I say almost because the best moment was at Debussy when I received a standing ovation and I was just so amazed. A friend took a photograph of me and I was just stood there smiling with a big grin on my face like an idiot. It was an amazing moment in my life.

SCREAM: You set yourself a bit of a challenge at a certain moment in your life and you decided to give yourself 10 years to get something off the ground or you’d give up. I read that that was the moment when you realised writing a horror movie was your best bet.

That’s absolutely right. I just felt that horror was going to be easier to finance without having any famous names in there, because I just didn’t have those kinds of relationships. But I had always been a huge horror fan and I even enjoy a lot of the bad horror movies too. To get back into the swing of things, I rewrote a script I had written about 20 years ago and I made it a lot more violent than it originally was. I then wrote a slasher but that was something that would have required a much bigger budget so I ended up writing something else which ended up being The Transfiguration. I had really wanted to write a neo-realist movie where we would shoot in live locations so that we could create a social-realism project so that we could paint a realistic portrait of someone. I heard about a friend of a friend’s child who was being bullied and that was when realised that that could work as the perfect starting point for this film.

SCREAM: Much of the movie was shot in live locations and with the cameras shooting long distances from the actors. How scripted was the film and how did the cast and crew deal with shooting in those kinds of conditions?

The film was highly-scripted but we would shoot from like a block away. There was a really nice moment on the subway and we would have the kids sat on the train and we would sit over the other side and secretly film them acting out their scene in normal surroundings. I just felt that it gave a realism to the film that shutting down an entire block couldn’t.

Eric was definitely out of his comfort zone when it came to these live locations but he was a real trooper. He first did a tonne of content in the confines of an apartment flat and he was fine with that but when we took him out to do the live location scenes, it wasn’t long before he started saying he was done with this style of filming.

SCREAM: Whilst the film doesn’t deal with real vampires, it does deal with a kid who feels the urge to perform the rituals that he thinks vampires would go through. What kind of research did you do for the film? There are actually quite a lot of people who believe they are vampires and do live that kind of life. Did you speak to anyone like that at all?

For the record, some people leave the film thinking that Milo is actually a vampire. (laughs) But in terms of research, the main thing I found out was that if you drink all that blood, you just vomit it all back up because of the iron content. Something that I did look into for research were common traits amongst serial killers or people with psychopathic behaviours from a young age. I found that there are a surprising amount of commonalities amongst them so I planted these into Milo’s character.

SCREAM: And what guiding points did Eric use to get into character because that’s a pretty dark rabbit hole for a 14-year-old to go down?

Well I gave him some films to watch, and Let the Right One In was his particular favourite.

SCREAM: That was definitely the first film I thought of when I first read about the film. I’m guessing it was a big inspiration, but at the same time, it must have had you second-guessing everything so as to keep things fresh.

Both Let the Right One In and Heavenly Creatures are my two favourite teenage vampire films but The Transfiguration is quite different so I wouldn’t say I was concerned about repeating things. Let the Right One In does actually come up in the film so it was definitely a big inspiration. But Eric was actually very good with some of the things he came up with. He came up with his own particular walk that I wasn’t very sure about at first. I asked him to repeat the scenes with his own natural walk but when we watched the scenes later, we soon realised that the walk he had come up with was perfect for the film and we went with it.

SCREAM: Being your first time in the director’s chair it must have been really beneficial to have the likes of Larry Fessenden and Lloyd Kaufman play roles in the film. I’m guessing they were really supportive.

It was intimidating at first. (laughs) I mean, Larry had made The Habit some 20 years earlier which I’m sure was a big inspiration to what I was shooting so it was intimidating in that way. But he was great and never complained, even when he came to set to shoot on the hottest of days and he was sweating buckets. Larry was also really helpful in choreographing things, especially stunt action. He was a real help when it came to choreographing his own death so I’m forever grateful for that. (laughs) And then Lloyd Kaufman is just the sweetest and friendliest and outgoing guy. Again, he didn’t complain a single time, when he had all the right to do so in the shooting conditions. They were both great.

SCREAM: I know that the slasher film you wrote was written with the idea of having someone else direct it and for bigger name actors to be involved. Is that project something you’d still like to see happen or have you got something else lined up now?

I have something else that we’d like to do first, basically because of the political situation. It’s a cross-country crime movie which Protagonist will be selling again for us. With Trump getting elected, we thought this would be the best one to get going first.

I would definitely still like to get the slasher movie off the ground eventually but I saw The Green Room and that was so well made. (laughs) I’m laughing because the concept I had was to take a slasher movie but ground it in our environment, very much like is done in the Green Room, and done so well. I think I’d have to rewrite that script and change quite a few things before I could really think about doing that one.

SCREAM: And would you like to direct that one now that you’ve got your first feature under your belt? 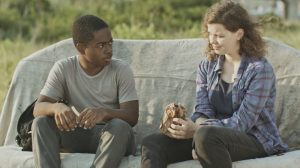 I don’t know. My scripts are very weird (laughs) and I can’t really imagine what a different director would make of and/or do with things that I have written. What I write is very weird in that it is very personal and very me so I would be interested to see what someone else did with one of my scripts but it something I have a hard time imagining just because of how very me they all are.

We’d like to thank Michael for talking to SCREAM and The Transfiguration will be screening at this year’s SXSW festival this coming March 10th. In the meanwhile, we’ll leave you with the film’s trailer: