Synopsis:
A popular college student gets a lot more than she bargained for when she accepts a friend request on Facebook from a strange girl, who quickly begins to stalk her online. 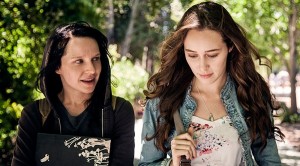 Horror films revolving around the internet and social media are apparently not going away any time soon, and while it is interesting to watch this relatively new subgenre trying to find its footing, examples of it done right are sadly few and far between. Sure, the internet can be a scary place, but so many of these films revolve around supernatural elements that any real fear which could be generated from the vast and faceless web is usually lost in lieu of cheap jump-scares and spooky faces popping into frame. That is certainly the case with Friend Request, released in cinemas in the UK this week – but it might elicit enough genuine chills to keep you browsing.

Fear the Walking Dead’s Alycia Debnam-Carey stars as Laura, a beautiful and popular psychology student with over 800 friends on Facebook. Like, OMG guys. Unfortunately, her blessed life takes an unexpected turn for the worst when she accepts a friend request from Marina (Liesl Ahlers), a strange and lonely girl she barely knows from college. Marina’s profile is filled with creepy artwork and disturbing gifs – but most shockingly of all, Laura is her first and only Facebook friend! Can you imagine? The horror!

Well, the real horror begins when Marina gets a little too clingy with her new friend, prompting Laura to try to shake her off and eventually unfriend her. Marina doesn’t take this so well, committing suicide in front of her webcam and uploading the footage to social media, but Laura certainly hasn’t seen the last of her. With horrible things being posted all over her Facebook profile that she can’t control, Laura’s friend count starts to drop as people come to believe she drove the poor girl to kill herself. It doesn’t help that her real friends are dying all around her, with Marina wanting Laura to become as lonely as she was.

I expected to hate Friend Request. Though I know I’m in a minority here, I despised 2015’s Unfriended, a waste of a decent filming concept centred around a ghost over Skype forcing a group of terrible friends who caused a suicide to confess their sins before making them kill themselves. Friend Request’s original title was Unknown Error, referring to the problems Laura experiences as her Facebook profile goes haywire, and while that is no less stupid than what they went with, it was changed to avoid being confused with Unfriended, which it suspiciously resembles in content if not in style. Fans of the genre will also spot it borrowing heavily from Final Destination and The Ring, with the creepy imagery from Marina’s profile plaguing the nightmares of those she kills.

But I’ll admit, while I did catch myself rolling my eyes at the film more often than I could count, I enjoyed Friend Request more than I thought I would. Its saving grace is its lead, with Debnam-Carey managing to pull a charming and sympathetic performance out of the silly material she’s given. Laura is hugely likeable compared to the gratingly obnoxious characters we see in most horror flicks aimed at a teenage audience. Sure, she leads an almost ridiculously privileged life in the film’s opening scenes, she is not a bitchy character, and her strained attempts at distancing herself from her obsessive stalker without hurting the girl feel very natural.

Unfortunately, the same praise cannot be heaped on the rest of the cast, whose performances range from bland to outright laughable. This isn’t helped by some cringe-inducing lines of dialogue (‘Unfriend that dead bitch!’) and a horrendously overacted villain whose motives remain a mystery to me. Marina apparently reaches out to Laura because she’s lonely, and Laura responds in a very decent manner, despite some of her friends commenting that Marina is a weirdo. It is Marina’s own intrusive behaviour which drives Laura to end the friendship. The vengeful ghost then decides she wants Laura to experience what it feels like to be lonely, but you can’t help but remember that Marina had nobody but herself to blame for that.

The film seems desperately to be trying to hint at some social commentary, perhaps something about being careful who you talk to online, or the dangers of our obsession with internet culture. All that comes across, though, is a mean-spirited moral about not trying to make friends with that weird artistic loner kid at school, because they’re probably crazy and maybe a witch. To give Unfriended some credit, it made sense for the ghost to haunt those idiots, because they were bullies who caused a suicide, and deserved to lose all their friends as a result. As Laura’s friend count ticks down in Friend Request, you’ll just wonder if any of the kids have ever heard of hacking, because friendly Laura clearly isn’t behind the nasty videos appearing on her account.

Still, some of the imagery is nice, some of the deaths satisfyingly grisly. Marina’s artwork provides a few eerie animations which would have worked better in a more stylistic film than this, but they still breathe a bit of life into an otherwise fairly generic and loud jump-scare strewn mess. It will probably appeal to a younger crowd (at the wizened old age of twenty-two, I was definitely the oldest in the room when I saw it this week, and the teens in front of me were squealing plenty). For the rest of us, it’s worth a laugh, but it won’t make you like, share and comment.