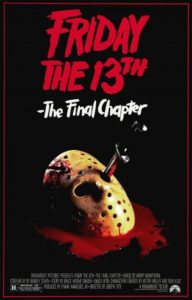 After the disappointment of the previous chapter, I didn’t hold any hopes for this movie – high or otherwise.

There is an interesting scene at the start where we see a summer camp and a group of young folks sitting around a campfire while someone recounts to them a horror story – that of Jason. The pretentious reviewer type in me grasped this scene as being a clever meta statement on this movie and the series in general. Perhaps none of this happened in the world of these movies – perhaps these are all campfire tales..?

Or, y’know, maybe they’re cheap schlocky movies about a guy killing people. Either one works, I think.

As is the norm, this movie picks up immediately after the events in the previous one, with Jason’s corpse being shipped off to the morgue. One creepy morgue attendant watching keep fit videos while trying to have sex with a nurse later, a not so dead as you thought Jason is back in action!

Meanwhile, another bunch of unlikeable teens are heading to the lake for a weekend of debauchery. Seriously – will they never learn?

They are the standard bunch, but amazingly, amongst there number is a character played by a young Crispin Glover. I wonder if his experiences at Crystal Lake turned him into the… eccentric chap he grew up to be..?

Also in the cast is a baby Corey Feldman, who is obsessed with horror movie SFX… wonder where that plot thread is going..? 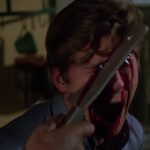 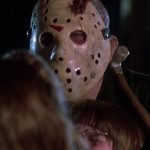 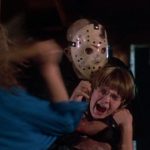 Some of the movie’s oddest comedy moments come from his character, as he spies a young couple having sex, or a group of teen girls skinny-dipping. Viewed from a 21st century position, this is more than a bit weird.

After the debacle of the third movie, this is a welcome return to form. Back is the lovely thread of dark humour. And most importantly, the murders are back to the gory and imaginative ones we had in the first two movies. As you’d expect, this upturn in the quality of the SFX was 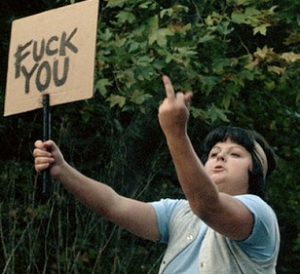 helped by the genius Tom Savini. Like Rob Bottin, he is an artist whose work is instantly recognisable.

While this movie sticks close to the formula of the previous chapters, there is still room to play with the clichés. In this episode, they play cleverly with the Final Girl trope. Yes, we have one, but not quite.

And even though this is called The Final Chapter, but I’m prepared to bet good money that even they didn’t believe that at the time.