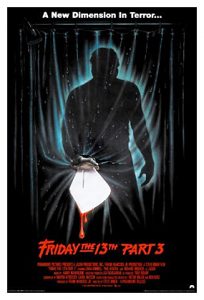 After the highly entertaining and bloody first two movies we reach this one. And in doing so, we get to our first misstep.

As I’m sure you all know, this was originally released in 3D. This was back in the early ‘80s when there was a brief flurry of interest in the gimmick. Thankfully it was a short lived fad, as it added little to this movie.

Not that this has a lot going for it to begin with.

Well, that’s not quite fair. The movie begins promisingly, with an injured Jason, immediately after the climax of Part 2, killing a bickering couple to get himself some new clothes.

Meanwhile, the usual group of unsuspecting teens are making their way to a cabin in the woods for some partying. On the way, they stop off in a small town gas station, where they cross swords with the most hilariously unscary biker gang you could imagine. Apart from the fact that the gang seems to consist of only three members, they look like they have stepped out of a Police Academy movie.

And that’s part of the problem. Whereas the first two movies seem to exist in a nice sweet spot outside of their contemporary setting, this one screams ‘early 1980s’.

And so, pursued by the bike gang, the teens make their way to the cabin where everything… kind of almost grinds to a halt. It takes an awful long time for anything to happen. This gets boring and even irritating at times. This isn’t helped by one of the group being a ‘hilarious’ practical joker. We get the ‘oh no! Someone has been murdered! Oh wait – it’s just a crazy practical joke!’ gag so many times it actually becomes tedious. This is made all the worse by the whiney teen’s excuse of ‘I only do it because I want people to like me…’ Really? Stop being a dick, then. 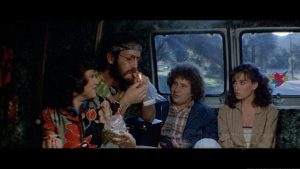 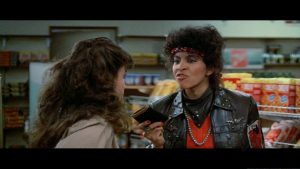 When Jason eventually does start his business, it is all rather underwhelming. I don’t know if it is because the (already minuscule) budget was redirected into the poor 3D elements (which seem to mainly consist of people waving sticks at the camera) or there was a decision to ease off on the gore, but for the most part they’re dull. There is very little of the imaginative methods employed by Jason and his mother in the previous movies.

But there are a couple of redeeming factors. One is that we see Jason get his trademark hockey mask, and in quite a clever way. And it’s just as well, too. We get a few glimpses of an unmasked Jason, and he is less than threatening. He looks like Sloth from the Goonies.
There’s that, and also a nice beat towards the end that plays on the climax of the first movie in a neat way. 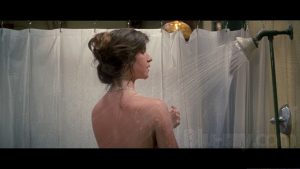 However, there two things are not enough to save this movie. In the end, it feels like a lazy mess that was banged out to make the most of the gimmicky 3D.

Let’s hope Part 4 picks up the pace a bit…