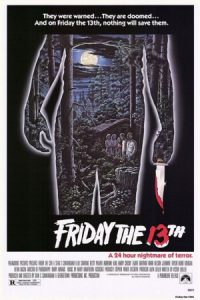 The set-up is familiar to any horror fan.

After a bloody prologue,  we open with a perky young girl asking directions to a local camp site.

Even with this familiarity, there are immediately some subversions of the well-worn genre tropes (didn’t take long to get to that word! Although they probably weren’t tropes at this point in time…). For example, when she goes into a local diner to ask for directions, cliché demands the room go quiet and the locals be all surly and unwelcoming. The opposite is true here, as they prove to be warm and helpful. Apart from the one that shouts that she is doooomed! Dooooomed I tell you!

So, this nearby campsite – Crystal Lake – has a bad reputation. You see Something Bad happened there a number of years ago and folks don’t much go out there anymore.

Naturally, we have a new group of young go getters who are up there preparing the camp for its first batch of visitors.

Throughout the movie, these young people are picked off one by one by the mysterious figure that stalks the camp.

Now, I know that most of you already know the twist. Hell, I did and I have never seen it – such is the depth this movie and series have seeped into the public consciousness. But taking a step back from that, this is a very clever villain. When we ‘see’ the killer, they are – until the final reel reveal – always in a POV shot, and intriguingly, some of the victims recognise whoever it is. 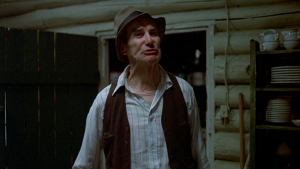 Another horror cliché is young people being punished for having sex. This is true here, too. However, unlike other movies, the reason for it here is actually logical and serves the story.

I did have some problems. Mainly they were the cast. No, not the cast exactly. The characters. Maybe it would have been different if I’d watched this as a teenager, but I found almost all the young people in this to be really annoying. Annoying to the point of enjoying watching them die. And die they do in the most spectacular ways. I’d go as far as to say the death scene of Kevin Bacon’s character still stands up as one of the best horror movie death scenes ever. 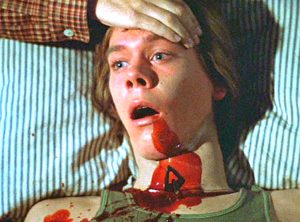 I have, as I write this, only watched the first two movies. However, I think another horror trope (that word again) that I will be referring back to is that of the ‘final girl’. I’m pleased to say they wrong footed me on that respect  – and in a shocking and brutal way. Ah hell, everything in this movie is brutal!

All in all, I have to say I was pleasantly (if that’s the right word) surprised by this movie. Yes, later movies in the series may well descend into shlock and gore for the sake of gore. This one, though, this is a genuine classic and more in the spirit of Psycho than any slasher movie.