The Film 4 FrightFest line-up was recently unveiled in all its horror glory and one of the film’s showing is Padraig Reynolds’ Worry Dolls. Worry dolls themselves were originally made in Guatemala and traditionally used by children who had trouble sleeping; they would tell the worry dolls their problems and they would absorb the worries for them, hopefully meaning the children would wake up worry-free and refreshed in the morning. This all sounds a bit sinister and dark to me. Unleashing your worries in to a doll is only asking for trouble.

The official synopsis for the film is as follows:
A brutal serial killer is finally gunned down in the middle of carrying out one last heinous act of bloody murder. In the maniac’s possession, a box of Guatemalan talismans, which mistakenly end up being sold as charm jewelry in Chloe’s Collectables thrift shop. Soon those who bought the Worry Dolls begin to act strangely out of character and cause another rash of senseless slaughter. An ancient curse is consuming the city and pits a hardened detective against the clock to save his 8-year-old daughter’s life. The latest horror thriller from Padraig Reynolds, director of The Rites of Spring.

See, only trouble can come from these dolls. Check out the two posters for Worry Dolls below, they’re very retro with a menacing tagline “Worry To Death”, which I’m sure many of us will be doing when we see the film. 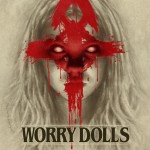 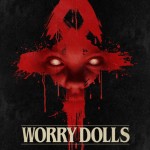 Worry Dolls can be seen at FrightFest of Friday 28th August 2015.
Share this...