The TSA just released their list of the 10 craziest things sized by the agency in 2018. Items include the usual hand grenades, mortar rounds and snakes stashed in a computer. But the item that topped their list was a replica of the glove worn by Freddy Krueger in Wes Craven’s Nightmare on Elm Street franchise! You gotta love them horror fans! 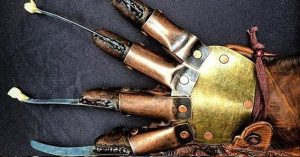