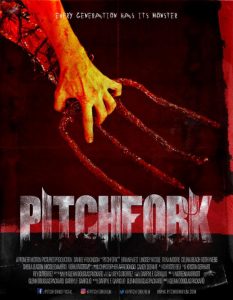 The murderous, misshapen beast of the title is played by K-Shop’s Daniel Wilkinson, with feature newcomer Brian Raetz as Hunter. The cast in fact, features a host of young newcomers, including Lindsey Nicole, Ryan Moore and Nicole Dambro.

Pitchfork is coming, and will be unleashed upon US audiences sometime this year.