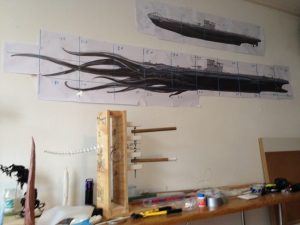 Frankenstein’s Army director Richard Raaphorst has shared some concept art for his second feature, and he looks to once again be finding bizarre ways to express the horrors of war, bringing us more outlandish mechanised monsters.

Raaphorst, who cut his teeth working in the art departments of a handful of Brian Yuzna and Stuart Gordon films, tweeted the image, which comes from his upcoming monster movie The Profundis. He wrote that: “We want to do this as practically as possible!”; an ambitious task given the nature of the image, which shows a military submarine sprouting tentacles. 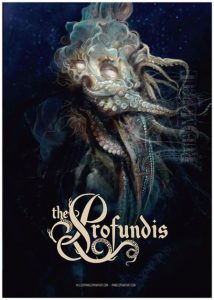 Raaphorst recently revealed that a submarine and its crew will undergo horrifying transformations in the film. “It’s about a group of smugglers using an old-fashioned U-boat, collaborating with a Christian terrorist cell to smuggle a secret biological weapon. It starts to leak into the submarine and infect the crew, and they devolve back into subhuman monsters. This story continues my fascination with military horror, but also my fascination with creatures, and trying to come up with something I’ve never seen before.”

This last comment certainly rings true with regards to Frankenstein’s Army which, while far from perfect, definitely served up its fair share of unique concepts and images.