Frankenstein As the Ancestor of All Horror Films

Written by Mary Shelley in 1818, Frankenstein or the Modern Prometheus is a classic novel that has sparked the imagination of millions of people worldwide and led to the creation of many other derivative works, including comic books, theater plays, video games, and films. In the novel, Victor Frankenstein is a scientist who creates a monster in his laboratory. This is one of the first examples of horror plots in literature, and it moved into the cinema too. If you’re writing an essay on this topic, read on to find more.

Frankenstein – A Classic Horror Tale
In her widely appraised novel, Marry Shelley gives life to two unique characters, Victor Frankenstein and the Monster. Through the strength of the characters, Modern Prometheus influenced popular culture in both Europe and the US for the last century, and the Monster of Shelley’s novel is one of the most recognized figures in horror literature and culture.

Film Adaption and the Creation of the Horror Genre
The rise of cinema meant that many classic tales were translated into films, and this was the case for Frankenstein too. The first film adaption dates back to 1910 and is only 16 minutes long. The film depicts how Frankenstein creates a monstrous creature in a vat, who ends up haunting him. In the scientist’s wedding night, the monster is conquered by true love and vanishes. Another film version followed in 1915, entitled Life Without Soul, but this adaption was lost. In 1931, a movie entitled Frankenstein reaches the screens in theaters. Over the next 88 years, film producers created almost 70 film adaptions of Mary Shelley’s Frankenstein. 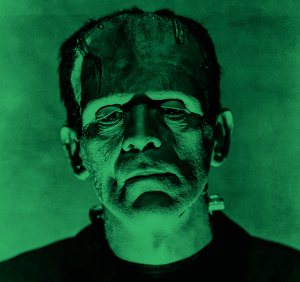 Why is Frankenstein a Horror Tale?
Reading essay examples, it’s evident that the theme which pervades the novel is monstrosity. Readers see the action through the monster’s eyes and he is at the center of attention. Frighteningly tall and hideous, the monster is rejected by society due to his grotesque appearance. However, the fact that he was created by mixing body parts from animals and unknown chemicals makes him even more repulsive because it suggests dark, supernatural forces.

Some literary analysts believe that Victor Frankenstein or the Modern Prometheus is the true monster in the story. His dark ambitions and his lack of empathy for his creation are the cause of the monster’s suffering. A good essay about Frankenstein can analyze these aspects. Most essay examples treat the theme of monstrosity from this double perspective because it stands at the core of the novel.

Thus, the frightening aspect of this classic tale is that true monsters are not only easily seen. The monster might not be who we perceive to be.

Consumed by hatred towards the Monster that he created, Frankenstein has shown himself to be selfish. Meanwhile, the Monster is empathetic towards human beings and very sensitive.

What Are Some Characteristics of Horror?
A good horror novel or film is not only about adding supernatural elements to the plot or creating monstrous characters that are easy to hate. Horror, especially gothic horror that we witness in Frankenstein, revolves around creating a disturbing setting.

The main dominant feelings in the novel are secrecy, mystery, and darkness. Elements such as supernatural beings, secretive meetings and events, isolated locations, or ancient settings are common in the horror genre. Also, the relationships between characters are determined by weird family secrets, repressed feelings, fears or betrayal.

The most frightening events in the novel, such as the episode when Frankenstein creates the Monster, is not described in detail. Readers only know that Frankenstein feels disgusted for what he has done and as he confesses his feelings, the readers can sense the horror. Most other episodes in the novel take place at nighttime, in mysterious locations.

The suspense in the novel reaches high levels because the Monster is frightening and ugly but shows humane feelings. The reader cannot foresee what the Monster wants to do and thus, is surprised by how the action unfolds. Suspense is a crucial element in horror culture, and the way Mary Shelley describes the events amplifies the feeling of suspense and crushes readers’ expectations.

What is the Relation of Frankenstein to Horror Films?
The connection between Mary Shelley’s 1818 novel and horror films provides a good study case for the influence of literature on the development of cinema. Various essay samples explore how Frankenstein films and many other unrelated films incorporate elements from the novel to create a horror tale on the screen. 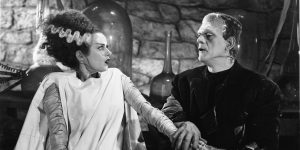 By copying the dark settings, eliminating details to create suspense and exploring psychological anxiety, horror films follow the methods used by Marry Shelley to create her horror story. This makes Frankenstein one of the prime examples of how good horror can be achieved, and the model was widely copied in cinema.

A classic tale beloved by children and adults alike, Frankenstein is a complex work that, at a thorough examination, shows mastery at creating suspense and fear. The tools used in the novel to create a frightening atmosphere that engages the audience are now copied in horror films worldwide.