Frank Sabatella to Direct the Nightmarish The Shed

Frank Sabatella (Blood Night: The Legend of Mary Hatchet) is sticking with the horror genre with his next feature, The Shed. The film follows a young boy who finds a monster in his back garden. In order to put an end to the bullying of his friend, he tries to lure the bullies to the shed where the creature is being kept.

If you want to learn more about the film, then have a read of this more detailed synopsis:

As an orphan, living with his abusive Grandfather, life sucks for Stan. But he’s got it better than his best friend Dommer who he regularly has to defend against the school bullies. And now their best friend Roxy, Stan’s secret crush, has fallen in with the cool crowd who harass them daily. But these “monsters” in Stan’s daily world are nothing compared to the monsters of Stan’s nightmare come to life. When Stan finds a murderous creature of the night has taken refuge in his backyard toolshed – and killed his Grandfather – he can’t go to the cops who’ll likely put him in foster care. While Stan tries to battle the demon alone, Dommer thinks it’s the solution to their bully problems, if only they can lure the bullies to the Shed. Will it bond the friends, tear them apart or just get them killed? Sometimes monsters turn regular folks into heroes, and sometimes they just turn them into different monsters. 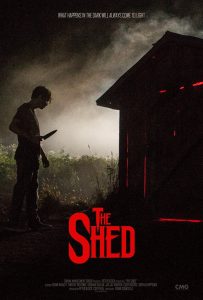 I love a good coming-of-age horror film and think the idea of real-life and fantastical monsters in The Shed sounds great. It sounds like this could be the blend of A Monster Calls and The Gate we’ve all been waiting for.