FOX STAKES THE PASSAGE AFTER JUST ONE SEASON 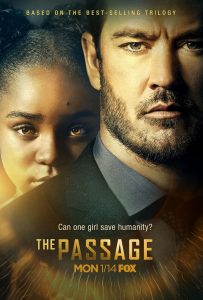 The first season of The Passage drew to a close in March, but fans hoping for a second season will be disappointed. Fox has cancelled the show due to poor ratings.

In the series, the U.S. government’s experiments on death row inmates turn them into bloodthirsty and incredibly infectious vampires. Oops. An orphan girl named Amy and an FBI agent try to save the world from total viral and nuclear apocalypse, but to no avail. Season one ended with Amy, also infected and hence immortal but without the urge to chew on necks, heading toward one of the last human outposts in the year 2116. And that, sadly, is where we’re going to leave her.

The Passage was based on the best-selling book series by Justin Cronin, and was executive produced by Ridley Scott. The first season followed the events of the first novel only, so fans interested in seeing where the story goes from there should check out the other two books in the trilogy, The Twelve and The City of Mirrors. (You can read our review of the latter here.)