FOX has given the order for a pilot of supernatural comedy Ghosted, which stars seriously funny dudes Craig Robinson (This is the End, Pineapple Express) and Adam Scott (Krampus, Parks and Recreation). 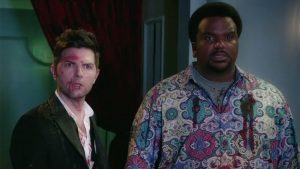 Described as “The X-Files as a comedy”, Ghosted is a single-camera comedy following a cynical skeptic (Robinson) and a genius believer in the paranormal (Scott) who are recruited by The Bureau Underground to look into a series of unexplained events in Los Angeles. Their investigations lead them to uncover a larger mystery that could threaten the existence of the human race itself.

Robinson and Scott will also serve as executive producers on the show, alongside Naomi Scott, Oly Obst, Mark Schulman and Tom Gormican, who scripted the pilot. Kevin Etten (Workaholics, Scrubs) will act as showrunner in addition to executive producing. The pilot was produced by 3Arts, Gettin’ Rad Productions and Twentieth Century Fox Television.