Four New Cast Additions for From Dusk till Dawn Series 3

There is no release date set for the third season of From Dusk till Dawn, but we can assume it’s going to be later this year. Season 2 had a successful summer debut back in August, so perhaps Season 3 will follow suit. The show’s official Facebook replied to a comment asking about Season 3 with, “Stay Tuned!” so I guess that’s what we will have to do.

The four new cast members for the show are Ana de la Reguera (Narcos), Emily Rios (Breaking Bad), Marko Zaror (Machete Kills) and Tom Savini (Friday the 13th). You’ll probably also recognise Tom Savini from the original Miramax film from 1998, because he starred as Sex Machine. In the series, however, Savini will be playing the role of a retired demon hunter called Burt. 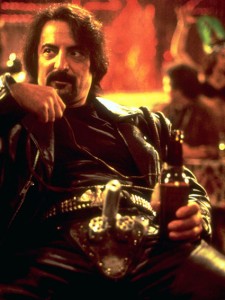 Synopsis:
Season three continues the Gecko Brothers’ saga, as they fight their way through the world of culebras, the vampire-snake hybrids that control hidden empires in Texas and Mexico.  Once the baddest outlaws in the land, Seth and Richie made a run for the border two years ago, to save their lives – and their fortune. They ran headlong into a bar full of bloodsuckers and bandits, facing off with the vampire goddess, Santánico. The Geckos joined her cause and settled an old score.  It won them a place in the culebraworld. Now, that world is about to explode, and new enemies are gathering – dark forces, hell-bent on destruction and domination. It’s up to the Geckos to stop them – but they can’t do it alone.