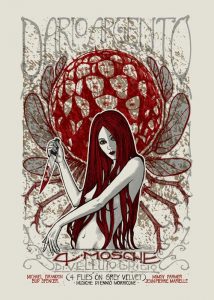 The final film in Argento’s ‘Animal Trilogy’ – preceded by The Bird with the Crystal Plumage and The Cat o’Nine Tails – Four Flies on Grey Velvet (Quattro Mosche di Velluto Grigio) received mixed reviews from critics when it was released in 1971. It’s certainly as stylish and elegant as we might expect from an Argento film, filled with strange, dream-like touches (like the animated beating heart on the title cards), but with a messy plot and jumbled dialogue, the film often feels more like an experiment than a successful, self-contained story. Still, Argento fans will find more than enough to enjoy here, particularly those interested to see the director moving closer towards making his best work.

When musician Roberto Tobias (Michael Brandon) discovers he is being stalked by a man in sunglasses, Roberto follows him to find out why, confronting him inside an abandoned theatre. He inadvertently stabs the man to death, but not before another mysterious figure takes his photograph, tying him to the murder scene. Soon, Roberto is being blackmailed by the photographer. This person – often wearing a creepy, child-like mask – sneaks into his home, strangles his cat, and eventually starts murdering those around him. But unable to go to the police, Roberto is forced to take matters into his own hands, trying to uncover the killer’s identity before it’s too late.

The act of seeing or watching is a running theme throughout the film, with many scenes centred around what a character has or hasn’t witnessed. The killer sees Roberto murder his stalker; Roberto’s maid catches the killer in the act; and the final mystery is even solved by retrieving an optogram, in which the killer’s identity is imprinted on the retina of his victims. Argento’s camerawork also strengthens this theme, emphasising the director’s obsession with partial sightlines. A camera is placed inside a guitar, the action masked by its strings; a camera is attached to a hypodermic needle, plunging into a character’s heart; and extreme close-ups are often used to disguise the killer’s identity, making it very clear that we are only seeing fractured pieces of the action.

But this doesn’t always work, and when the killer is revealed at the end of the film, it almost feels like we’ve been cheated, as there are hardly any clues or red herrings during the first two thirds of the film. Unlike Argento’s other gialli, particularly the ones he made afterwards, the final reveal feels like an afterthought, like something made up on the spot. The writers claimed that they came up with the murders first and the plot second, and unfortunately it shows. Unlike Deep Red or Tenebrae, Four Flies on Grey Velvet is not as taut or tightly-paced as it could have been.

Gender and sexuality has always played an important role in Argento’s work, particularly due to the Freudian subtext inherent in his films. Four Flies on Grey Velvet is no exception, with many examples of reversed gender roles (as well as some pretty heavy homoerotic undertones) throughout the film. Similarly, the film is laced with dream-like imagery, emphasising the psychoanalytic aspects of the narrative. The action is even punctuated with a recurring dream, in which Roberto sees a prisoner getting beheaded outside of a Middle Eastern temple. These sequences add to the surreal atmosphere of the film, but besides tying in to the film’s final decapitation, they don’t say much in terms of character or plot. In Argento’s later work, these dreamy motifs are used to exacerbate the psychology of the central characters; here, they often feel shallow and meaningless.

But, in terms of Argento’s propensity for making the violent beautiful, nothing compares to the final sequence of the film – arguably the most visually impressive sequence in any of his movies. When one of the characters crashes their car into a lorry, Argento – using a high-speed camera – renders the whole sequence in slow motion. Over Ennio Morricone’s lullaby-like score, the windscreen smashes into hundreds of glass shards, as a close-up of the victim’s face shows every second of visible emotion. It is only when the victim’s head rolls into the road and the car bursts into flame that the film returns to its normal speed. The whole sequence lasts no more than a minute, but is so beautifully rendered that it leaves a lasting impression, even if the film as a whole seems underwhelming.

Four Flies on Grey Velvet is a deeply flawed film. The pace is sluggish and circuitous, and the hurried script leaves more questions than answers in the mind of the viewer. But in spite of this, the film contains some genuinely atmospheric set-pieces, and Argento’s direction elevates the movie into something far more artful than it might have been. If nothing else, it’s possible to see Argento move towards his best work, and there are shades of Deep Red and even Suspiria throughout. While it may not rank amongst his better works, Argento fans will certainly want to add this to their collection.