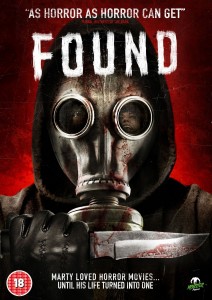 Synopsis:
A bullied, horror movie-loving youngster finds his life tipped upside down after discovering his brother is a serial killer.

It’s fitting that this year, amidst a flurry of video nasty nostalgia and the thirtieth anniversary of the furore’s resulting Video Recordings Act, that director Scott Schirmer’s ultra low-budget indie FOUND should find British distribution. It’s perhaps even more fitting and, indeed, even ironic that said film should end up a victim of the BBFC’s censorious pruning shears too, considering how it deals with one of the very things that both they and the then tabloid media were oh-so-concerned about: violent horror movies as a catalyst for psychotic behaviour.

Typically, it’s Found’s best sequence that’s been compromised; its powerful, jaw-dropping and lyrical end stretch now somewhat muted by a four second snip, the utterly striking image of a nude Steve (Ethan Philbeck), his face covered by a gas mask, excised due to him having a (prosthetic) erection. While Schirmer’s finale still works without it, as a payoff to one of his and co-writer Todd Rigney’s (whose novel Found is based on) most satisfying concepts – Steve’s sexual gratification from his acts of brutal slaughter – its omission is a real heartbreaker.

To atone, distributor Monster Pictures have supplied Found with a surprisingly lavish supplementary package on this side of the pond, porting over the cracking director and writer audio commentary and one of the two short films-within-the-film, Deep Dwellers, from the totally uncut XLRator region one disc, and adding a nice, half hour making of, gag reel and a whole other second talk track. The inclusion of the other short as a separate, playable feature, the torture porn Headless, has, alas, been scrapped. Still, it could be much worse; the poor Aussie’s have had a whopping two minutes (erroneously reported as seven) chopped from their disc, after the film was initially refused classification.

Sadly, neither Found’s sublime ending, nor its tidy DVD release or fascinating censorship history can save it from the depths of maddening mediocrity. It’s perhaps one of the most infuriating examples of Bookend Syndrome of recent years, with Found’s opening scene too also a real thumper; “My brother keeps a human head in his closet,” twelve year old Marty (Gavin Brown) calmly tells us, before pulling the severed bonce out from Steve’s bowling ball bag and inspecting it. It’s stirring stuff, an introduction every bit as throat grabbing as the start of the original TEXAS CHAIN SAW MASSACRE or John Carpenter’s HALLOWEEN, and one that sets a high standard that the rest of the film fails to live up to – well, until the last ten minutes anyway.

Before that though, there’s eighty-odd minutes of Schirmer and Rigby’s leisurely, hit-and-miss scripting to wade through, the occasional bright spot mostly overshadowed by paper-thin characterisation and extremely clunky dialogue; most of which is delivered with all the sincerity of a secondary school drama group. The excellent young Brown aside, Found’s cast is, by and large, dreadful, with Brown’s stupendous turn doing nothing but highlight just how flat the other performances are. Worst of all, however, is the aforementioned message behind Found; is it really that wise for a horror movie that embellishes violent and provocative imagery itself to imply that such things can spur the already clearly disturbed on to a killing spree of their own?

Of course, there’s still enough to make Found a solid recommendation; Greg White and Magic Johnson’s beautiful, Tangerine Dream-esque score, and Leya Taylor’s gorgeous cinematography especially so. The latter is so good, in fact, that Taylor and Schirmer’s aesthetic collaboration must surely – along with the awesome, lusciously shot creeper MEET ME THERE – be the benchmark by which all other cash-strapped, grassroots shockers must now be measured against, visually; it’s a million times better than Found’s paltry $8,000 budget would have you expect.