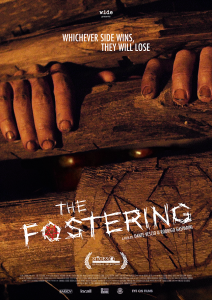 Brazilian filmmakers Dante Vescio and Rodrigo Gasparini may not have made the cut of The ABCs of Death 2 with their short M is for Mailbox (although it shows up in the upcoming, M-centric ABCs of Death 2.5), but they very much mark themselves as talents to watch with their feature debut. Originally titled O Diabo Mora Aqui, The Fostering opens on a grim note with a slave owner offering a diatribe in which he compares his slave Bento to the worker bees in his farm’s hives, and describes how in order to control the workers, one must control the queen. His method, we later find out, involves impregnating Bento’s mother.

The bleak solemnity of the period opening, and the particular chapter of history it represents hangs heavy over the remainder of the film, which sees the present-day farm inhabited by Apolo, who invites three friends for a visit. Detailing the land’s history, Apolo tells his friends that Bento’s mother killed her baby in the basement, where he has prepared a ceremony to free the baby’s tortured spirit. Meanwhile, two descendants of Bento resurrect the onetime slave and head to the farm, knowing that freeing the baby will also release the vicious slave owner, known as the Honey Baron. Their arrival at the farm however, heralds a whole lot of shit hitting a very large fan. Bento is back, but dead seldom means gone on the farm, and soon, the Honey Baron also makes his return.

The Fostering’s themes of slavery and recurring images of bees and honey may invite comparisons to Candyman, but while at the film’s heart lies an occult chiller, it feels at times far closer to The Evil Dead. Despite its size, the farmhouse is made eminently claustrophobic and with tight angles of its small rooms and wood-panelled walls, feels every bit the remote cabin. Then there is, of course, the shadowy basement where the young friends must face the land’s terrible secrets. During the film’s more intense moments in fact, it grabs you by the throat and rattles your nerves in a manner not at all unlike a Sam Raimi flick. The oppressive claustrophobia is heightened by the relentlessly uncomfortable close-ups the characters are frequently viewed in. This technique loosens as the film moves along, allowing the frame to open up and see the hooded Bento and the towering Honey Baron in all their horror. 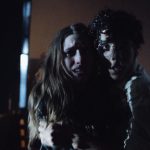 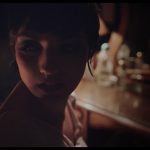 Wide-eyed and all-commanding, the resurrected Honey Baron is a terrifying figure indeed, standing out even among the truly nightmarish imagery that lurks everywhere. The voices and visions experienced by Apolo’s friend Ale for example, are genuinely horrific. Ale is no stranger to hearing voices, taking pills to suppress them, but here on the farm they become louder than ever, warning her of the impending fates of her friends. One such scene involves rapidly cut images of terror, with Ale swirling around, illuminated intermittently by the blinking hazard lights of a car in the night. It’s a typically well-composed scene visually and on this front, it is impossible to find fault throughout the film. The Fostering is the most beautiful nightmare you’re likely to have in a while, and while the Honey Baron’s bloodied face will sear itself into your mind, the film’s general aesthetic will stay with you too. 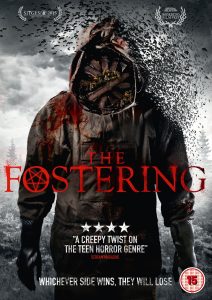 It’s a rare criticism of a film, but The Fostering would perhaps have benefitted from an extra 15 minutes on its runtime. Cramming multiple plot threads and timelines (as well as elements of history, folklore and the occult) into less than 80 minutes, the film occasionally threatens to leave the viewer behind, and would no doubt reward a second viewing. Having said that, the tightly-woven story is expertly and efficiently told, leaking its secrets gradually as it builds and builds to its frenzied finale. Part period horror, part morality tale and part rural shocker, The Fostering is an impressive entry in the new wave of South American terror, and as pure a horror film as you could hope to see.