During the early development stages of this year’s The Dark Tower film we were told that Media Rights Capital were also working on a TV series adapted from Stephen King’s book series. While the original plan of releasing film and series close together obviously won’t be happening however, it does seem as though the series is still on the cards.

Clearly not allowing their plans to be swayed by the film’s mostly negative reviews, MRC and Sony Pictures Television are beginning development on their TV adaptation and, rather intriguingly, they’ve hired former The Walking Dead man Glen Mazzara as showrunner. Mazzara ran the smash zombie series from 2011 to 2013, and will take lead writing duties on The Dark Tower. Reportedly an origin story of sorts, the series is being eyed for a short order of 10-13 episodes. 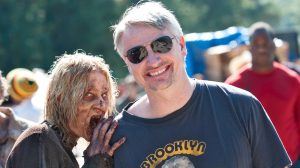 “I’ve been a Stephen King fan for decades and the opportunity to adapt The Dark Tower as a TV series is a great honor,” Mazzara (pictured right) told THR this week. “The events of The Gunslinger, Wizard & Glass, The Wind Through the Keyhole, and other tales need a long format to capture the complexity of Roland’s coming of age — how he became the Gunslinger, how Walter became the Man in Black, and how their rivalry cost Roland everything and everyone he ever loved. I could not be more excited to tell this story. It feels like being given the key to a treasure chest. And oh yeah, we’ll have billy-bumblers!”

Now there’s a reference only fans of the books will understand.

Currently in the early development stages, The Dark Tower series is scheduled to begin production in 2018.