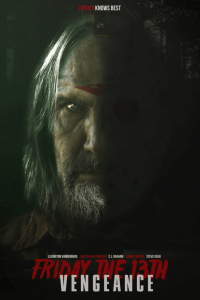 Directed by Jeremy Brown., Friday the 13th: Vengeance is an unofficial 30-years-later sequel to Part VI. The film sees Elias Voorhees returning to the notorious Camp Blood, only for a slew of murders to follow. After Tommy Jarvis goes missing, his daughter, Angelica, sets out to find him—and destroy his old nemesis, Jason, in the process.

The project was funded on Kickstarter and is currently in post-production. It will feature music by Harry Manfredini, who scored the original series. Tom McLoughlin, the director of Part VI, served as a consultant on the film.

Ch-ch-ch-check the official trailer below.