WE ARE THE FLESH: Film Review

Synopsis:
A pair of siblings stumble upon a lonely man’s underground bunker after wandering the city and looking for shelter. In exchange for food and a bed to sleep in, the man presses them to partake in actions that can only be described as hideously disturbing. 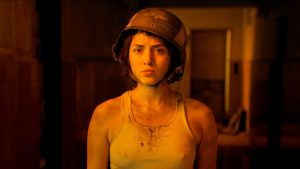 You have to hand it to We Are The Flesh because it has everything: cannibalism, necrophilia, incest, vampirism, rape, murder, full-frontal nudity and twisted religious worship. It also has musical numbers, dream sequences, people rising from the dead and huge tubs of goopy liquid. It ticks all the boxes for what you’d expect from a film that is as divisive, disturbing and wholeheartedly difficult to watch as this. I say it’s difficult to watch, because I know that a lot of people would cover their eyes, look away or switch of entirely within the first few minutes. However, I was riveted and glued to my seat. I’ve never had – touch wood – sleep paralysis, but I’m pretty sure I experienced a type of waking paralysis when the events in We Are The Flesh unfolded before my eyes, because I was unable to look away during it’s unbearably short 80-minute runtime. That being said, do I want to watch this again? Hell, no.

There are a heap of films out there that you’re glad to have watched, but would never do so again. A Serbian Film, Grotesque, The Human Centipede, or the 100 Days of Sodom are probably a few for some fo you. We Are The Flesh effortlessly joins these ranks of films that are great for the one watch, but never again. The combination of harsh content and uncomfortably impressive visual style craft a film that is, on the surface, one of the most unpleasant viewing experiences I’ve ever had. We Are The Flesh is a type of pretty pornography where graphic nudity, incest and masturbation is accompanied by a sort of distorted John Keats poetry voiced by the film’s central character and stark, simply beautiful lighting. The contrast of sexual, physical horror and striking colours of yellows, blues and pinks will pull you in two different directions; one where you want to praise the film’s glorious visual style, editing and cinematography and the other where you want to drive a stake through the heart of its indescribable indecencies. 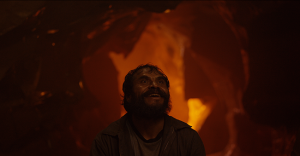 It would be unfair of me to describe every torturing action that occurred during We Are The Flesh, because it’s best that you watch it with the possibility of being wholly shocked. Like I was. As I attempt to unearth the deeper meanings within We Are the Flesh’s obscenities – because the horrors have to be a symbol or metaphor for something! – I can only draw a few possible conclusions. In simple terms, We Are The Flesh is a physical presentation of the desires and drives that we so desperately try to control. As Mariano (Noe Hernandez) so elegantly puts, “We don’t fuck our mothers”. Even if we were that way so inclined, we would be prevented of doing so by society’s expectations, rules and moral values. What happens when the social order breaks down? All its rules, regulations and expectations come crumbling down, too. Mariano, Lucio and Fauna exist in a world literally beneath the real shattered world, where all their sexual fantasies can be lived without any consequence, because who is going to do anything about it?

A troubling, but criminally mesmerising, underground shelter is built by Mariano and his young helpers. By the end, their “home” looks like a cave of sharp points, drowned in shadows but lit by unnaturally bright lighting that encourages the audience to understand that this new world exists separately from the one we are familiar with. The film’s more fantastical events are tied to Mariano’s desire to push the boundaries of nature in the hope of being reborn; there is a drive behind is actions, if you can believe that. His world is an entirely free one that is fed on blood and driven by twisted animal instincts and the need to be at one with every body. It’s a complicated and purposely vague motivation, with much of Mariano’s cult-like mumbo-jumbo ensuring we don’t associate with his actions. The film may present the monstrous as somewhat magical, but there is still a keen intention to prevent us from believing that the film’s depictions of sexual depravity and murder are glamorous, despite the beauty that surrounds them. It’s a careful line to tread, but director Emiliano Rocha Minter manages to do the impossible as a he presents We Are The Flesh as a gutsy, brave and thoughtful feature, despite the obvious deviances that could easily shadow some viewers’ appreciation for his work of perverse art. 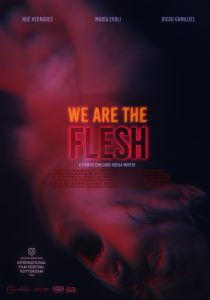 At the core of Minter’s sadistic story are three actors who are, simply, excellent. Hernandez embraces his character’s possibly innate sanity, presenting a someone that is a reflection of the tattered world that rages on above his own house of horrors. Along with Diego Gamaliel and Maria Evoli, he gives a brave performance that pushes him to the edge of what is acceptable. Gamaliel and Evoli become his playthings and it is impossible to imagine the courage it took to carry out some of the film’s more alarming sequences. Minter may have had the vision, but without this strong trio of actors, We Are The Flesh would not be the controversial and astounding film that it so clearly is.

We Are The Flesh is not your average party. It is sick, disturbing and hideous. But there is splendour in the madness and if you are willing to search for it, you might appreciate the film’s effortless ability to shock, but also be mesmerised by its outlandish, grotesque beauty.