Flatliners will not be Revived Until September 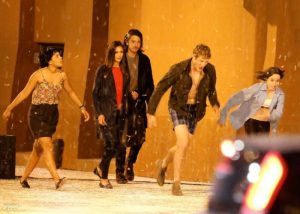 When Sony announced early this year their plans to make a Flatliners film, we all assumed a remake of Joel Schumacher’s 1990 sci-fi chiller was on the cards. Since then, original star Kiefer Sutherland (who returns in the new film) confirmed that it was actually a sequel to the cult classic, which also starred Kevin Bacon, Julia Roberts, William Baldwin and Oliver Platt. The latest on the project is that its scheduled release date of August 18th, 2017 has been pushed back a little, to September 29th.

No reason has been given by Sony for the change, but a clash within their schedules could be the cause, or perhaps an unwillingness to compete with a bigger release. Either way, it’s not a huge delay.

The original film centred on a group of young medical students who decide to explore what lies beyond by stopping each others’ hearts for increasing periods of time. As they begin to stay ‘dead’ for longer, childhood nightmares come back, and begin to manifest into things more real.

“I play a professor at the medical university,” Sutherland told Metro back in July of his role in the new film. “It is never stated but it will probably be very clearly understood that I’m the same character I was in the original Flatliners but that I have changed my name and I’ve done some things to move on from the experiments that we were doing in the original film.”