It was early last year that Sony announced an upcoming remake of Joel Schumacher’s Flatliners, and just a few months after that that we were told to expect more of a belated sequel to the cult 1990 chiller. I think it’s probably best to pitch your expectations somewhere in between but either way, this week we got our first trailer, which you can see below. 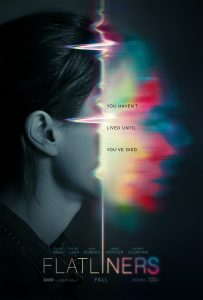 The thrill-packed trailer suggests a glossier affair than the original film, in which a group of young medical students – played by Kevin Bacon, Julia Roberts, William Baldwin, Oliver Platt and Kiefer Sutherland, who appears in the new film – decide to explore what lies beyond by stopping each others’ hearts for increasing periods of time.

The Girl with the Dragon Tattoo director Niels Arden Oplev is helming the sequel/reboot/whatever, from a script by Source Code writer Ben Ripley. Starring alongside Sutherland are the mighty Ellen Page, Nina Dobrev (The Roommate, The Final Girls), Kiersey Clemons (Bad Neighbours 2), Rush’s James Norton and Diego Luna (Rogue One).