Mike Flanagan (Doctor Sleep, Gerald’s Game) is heading back into the twisted world of Stephen King. This time, he’s writing and producing an adaptation of King’s novel Revival for Warner Bros, with an option to direct. 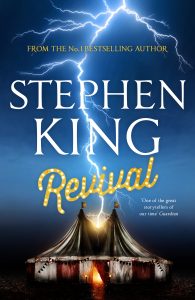 Also on board to produce is Trevor Macy. Macy has previously served as a producer on a variety of Flanagan’s projects, including Doctor Sleep, Oculus, and Hush.

First published in 2014, Revival follows Jamie, a musician and heroin addict whose path crosses once again with his childhood minister, Charles Jacobs. Now a carnival faith healer, Charles’ lifelong fascination with electricity takes a chilling turn when he attempts to communicate with his dead wife and child—seeing something truly horrifying in the process…