Synopsis:
After the birth of their first daughter Thea, a couple find their lives hampered by supernatural entities that are determined to get their hands on her. 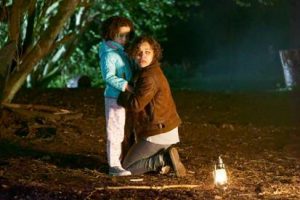 FirstBorn is like an episode of Eastenders with elements of horror thrown in. Perhaps its the British location or the underlying theme of a struggling young mother, but there is something reminiscent of a soap opera beneath FirstBorn’s moments of cinematic terror. This does not hinder the film and, in fact, I would argue that there is strength in its confined domestic setting, generally unpolished feel and similarity to a daytime television program. It’s immediately unsettling to be greeted with a space that feels so real and different from glossy American horror films. A simple handling and presentation of events can be seen in the film’s initial natural lighting and restrained editing. This isn’t trying to impress us with gimmicky camera techniques or flashy editing, we are being drawn in to the story through the film’s restraint and sole concern with events and not effects. It’s an effective introduction to the story that differs from what we might expect from a typical haunted house or ghostly horror film. There is no clear warning for what’s to come, so when things start to get creepy it’s pretty damn eerie thanks to this smart contrast.

For the most part FirstBorn is a perfectly entertaining supernatural flick, but there comes a moment in the middle when the film feels slightly uneven. There are some great touches that make interesting parts to the film’s whole, but as a complete feature, it doesn’t quite manage to hold itself together successfully. The idea that Thea cannot have dolls with faces because they work as gateways to the paranormal and her need to carry out a ritual on a daily basis to keep any ghosts at bay, are two neat tweaks that show an understanding of bringing new ideas to this horror table. Sure, the film is also filled with your more cliched moments of terror; doors shutting and locking on their own, strange noises and characters fighting invisible enemies, but there is an unmissable amount of creativity present here that deserves to be recognised. Not everything in FirstBorn works and there are plenty of directions the film could have done without, but the film’s first half is excellent. In the end, there is quite a lot going on in what was, at first, a tight and constrained storyline, that counteracts the film’s attempts to be different and prevents it from remaining in exemplary territory. 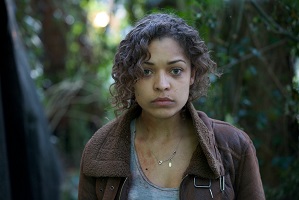 This may not be a masterpiece in horror film-making, but FirstBorn excels with its strong cast. As a struggling mother, Antonia Thomas shines an honest light on the reality of becoming a young parent unexpectedly. She carries her character with an air of naivety, perfectly mimicking the concerns and fears a new mother would have. Obviously, her fears are more out-of-this-world than those a typical mother would face, but it is easy to transfer her actions to the fears every new mother faces. Horrors love to seek refuge in the home and here it is no different. As with many familial frighteners, FirstBorn’s supernatural entities are manifestations of worries from reality. Here, the new mother considered an abortion, worried she was too young for a child and tried to drown her sorrows in alcohol while she was pregnant. She found her strength in her boyfriend, who described the baby as a “little us”, encouraging her to keep the child that they could raise together. However, now that the baby has been born, she has found herself alone and struggling with the responsibilities a new child brings. Her loneliness, fear and, perhaps, regret, combine to create this explosion of ghostly occurrences that threaten her child, forcing her to realise and understand her role as a mother is more important than any inner doubts or worries she may be holding. It’s a touching and familiar theme for a horror film and much of FirstBorn’s ideology has been snatched from Poltergeist among others, but it is executed here with care and credibility, something that can be overlooked in other modern flicks whose prime concern is with executing scares, rather than grounding their story in a tenacious reality.

Things get a bit too silly for me when we are introduced to Elizabeth (Eileen Davies). She is called upon to help Thea, but her magic tea and strange teaching methods deviate far too much from the film’s initial concern with reality. Realism and the occult buck heads for the remainder of the film and this is where FirstBorn starts to get a bit predictable and long-winded. The aforementioned simplicity is abandoned and replaced with fantastical sound effects and the flashy editing I thought it would refrain from adopting. It’s a shame, because if it had toned down these absurd cutting techniques and mind-bending effects, we would have been left with a solid, ominous effort with otherwise impressive CGI. The supernatural creatures are effectively spooky, so it’s a shame that there is a lack of confidence present in the film’s decision to accompany them with shaky camera work and blurred visuals. 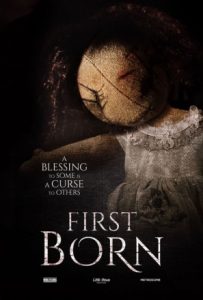 Putting aside the minor problems with FirstBorn and you’re left with something almost exceptional. As a truthful presentation of motherhood and the fears that come with it, the scariest part of the film will be watching Charlie struggle to keep her small family together. This is an impressive second feature from writer-director Nirpal Bhogal who has distinctly brought a handful of Sket’s gritty reality to FirstBorn, sprinkling it with ghostly goodness to ensure its foot stands firmly in the horror genre and nowhere else.