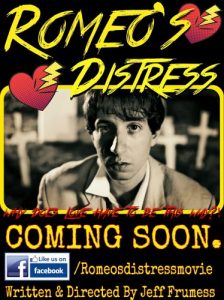 An indie venture in the truest sense, the film was shot over 15 months by a two-man crew consisting of Frumess and Nick Bohun, on a barely-there budget. Shot almost entirely in monochrome, it is a mixed-up melting pot of various influences including John Waters, Gothic horror, surrealism, Shakespeare and Edgar Allan Poe.

The film is described by the filmmakers as “…a weird, quirky, genre-bending, piece of no-budget filmmaking. It is a Shakespearean, Gothic, Horror-Thriller that tells a story of a boy name James, his unrequited love for a girl named Jane, and her father’s sadistic (yet dutiful) response to it all.”

Head to the Romeo’s Distress Facebook page to keep up-to-date on this bizarro slice of underground horror madness.