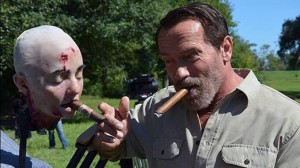 The long wait is over and now, in the run up to its screening at this year’s Tribeca Film Festival, the first trailer arrives for the zombie film, Maggie, starring none other than Arnold Schwarzenegger. Maggie is all set to screen at Tribeca on the 22nd of April before hitting U.S. cinemas and VOD on the 8th of May through Lionsgate. The UK release date is currently unconfirmed at the time of writing this but we’ll keep you updated on that. In Henry Hobson’s directorial debut, teenager Maggie (Abigail Breslin) becomes infected by an outbreak of a disease that slowly turns the infected into cannibalistic zombies and her father (Schwarzenegger) stays by her side to support her through her horrific transformation.

Official Synopsis:
The film tells the story of a deadly zombie virus that has put a plague on the world. When Maggie, a vivacious young woman becomes infected, her father brings her home to let her be with their family. As Maggie’s condition worsens, their relationship is tested, a father’s love holding on stronger than the disease. This heart-wrenching twist on the zombie apocalypse puts a human face on an inexplicable horror.