Trailer For Found-Footage Film Creep With An Insane Mark Duplass 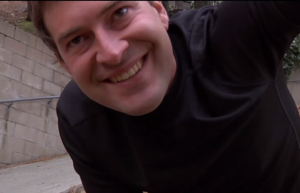 The found-footage genre is still alive and well as demonstrated in Patrick Brice’s disturbing and eerie Creep trailer, released by BH Tilt. Brice will star as naive and broke Aaron opposite Mark Duplass (The Lazarus Effect) as the devious and less-than-sound mind Josef.

Creep first premiered at SXSW Film Festival where it was rated highly, and is set to be the first in a trilogy, with the other two films having already been filmed. It will be available on iTunes June 23rd 2015 and on Netflix Instant July 14th 2015.

Synopsis:
Aaron is desperate for work but most importantly, for money. His luck seems too good to be true when he finds an online advertisement offering $1,000 for a day of filming services with discretion appreciated. Aaron jumps at the opportunity and makes his way to his filming subject’s house in the middle of a remote mountain town. He meets Josef, a slightly odd character, but nether-the-less genuine, friendly and just looking to film a heartwarming project. As the day progresses, Josef’s behaviour changes and Aaron soon realises that he may have met someone who defines crazy.