Trailer For Disturbing Exploitation Film The House With 100 Eyes 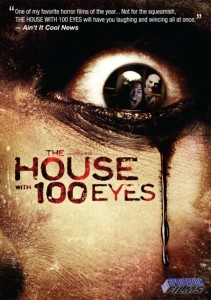 Most exploitation horror films seem to have a few years behind them now, but the genre is slowly being revived one film at a time, and The House With 100 Eyes looks like a good starting point.

Dubbed to be a fusing of Henry – Portrait of a Serial Killer and This Is Spinal Tap, the film is set to be one hell of a ride, leaving viewers feeling ashamed at laughing whilst bodies are being mutilated. The trailer definitely looks like the film is going to be excessively gory and laced with satirical humour.

The House With 100 Eyes is directed by Jay Lee and Jim Roof, and will star Shannon Malone, Larissa Lynch, Liz Burghdorf and Andrew Hopper. Artsploitation Films will be releasing the mayhem June 16th 2015.

Synopsis:
Take a step inside one of the most twisted and sick households as we follow married couple Ed and Susan, who seem like your average middle-classed husband and wife. However, the two have a dark secret that they hold no shame in as they’re successful serial killers who make a small fortune selling snuff movies on the underground market. Ed plans to make their next DVD the best yet, as it will feature three brutal murders in one night, however, this night things don’t go as expected.