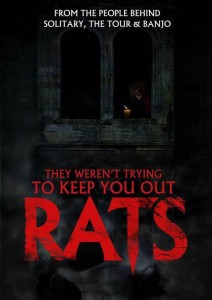 In September of last year, the short horror film Rats had an extremely successful campaign on Indiegogo that saw it raise 106% of its desired funding. With a great cast that includes Laurence R. Harvey (The Human Centipede II, The Editor, Banjo), Jessica Messenger and David Nichols, as well as the promise of a truly terrifying story, Rats garnered a lot of interest.

Now, we have the first teaser trailer to share with you and it sets an expected macabre and eerie tone that sets the film up to be something very spooky, indeed. Furthermore, the final shot that shows the devilish look on Laurence R. Harvey’s face is enough to get us wondering what’s being kept in that castle…

Synopsis:
Bill is a middle aged lecturer and antiquarian book specialist who arrives at Montague Castle to catalogue the library’s more interesting volumes. But Bill has other things on his mind for his time away from his young family. He intends to spend a night of passion with Jess, one of his undergraduates.

What better way to impress a girl than to have a night alone with the run of a castle?

Only they aren’t quite alone. There are scratching noises from the room next door, and the sense that someone, or something, is watching. By the end of this night, Bill will learn that all actions have consequences especially within these ancient walls.

Rats will probably hit the festival circuit very, very soon, so keep an eye out for it!