This gloriously gory image is our first official look at Puppet Master: The Littlest Reich, the much anticipated reboot of the cult Full Moon straight-to-video film series. 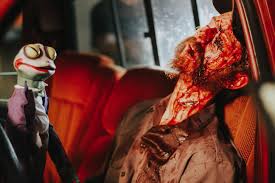 The film comes from Sonny Laguna and Tommy Wiklund, the directing duo responsible for the Evil Dead-inspired splatterfest Wither and the upcoming They Cast no Shadows, and will have its world premiere at New Orleans’ Overlook Film Festival, taking place from April 19th – 22nd.

“During a roadtrip to a convention for the 30th Anniversary of the infamous Toulon Murders, a comic book nerd, his new girlfriend and his best friend come face to face with a set of sadistic nazi puppets out for blood.”