The book is split into chapters with each one covering a different year. In each chapter, we get the author’s selection of the pivotal horror films of that year. You’ll read a synopsis and some background information, budget, box office takings, critical reaction, etc. Of course, the films that courted controversy or fell victim to being banned have the juiciest stories.  A few images from the films are included. The entries I like the most are the ones that include interviews the author did with actors, such as Dee Wallace, Adrienne Barbeau, and Felissa Rose. He also spoke to directors including Wes Craven, Tom Holland and Brian Yuzna. 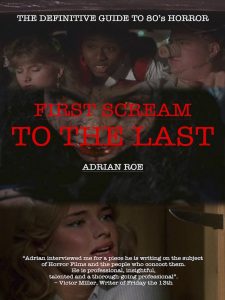 The movies covered include the big names you would expect, Halloween, Friday the 13th, Evil Dead, and Sleepaway Camp. There are also some titles that are a bit more obscure which many might not have seen yet, such as Deadly Eyes, Xtro and Bad Dreams. I was pleased to see plenty of Lucio Fulci and Dario Argento entries. There are tons and tons of movies covered, so lots of delights await the reader.

It’s a nice whirlwind tour around some classics from the genre. It’s not incredibly deep on each film, but there is enough to pique the reader’s interest if they haven’t seen a film and the interviews really add some colour. I’m really glad I picked it up, as it’s a great reference and an interesting read for fans.