There was talk last year of a new Re-Animator film, then titled Re-Animator: Evolution, that had writer/director/actor Serge Levin attached to direct. Levin said at the time that the film was not a remake of Stuart Gordon’s beloved 1985 film, but a fresh adaptation of H.P. Lovecraft’s 1922 short story Herbert West-Reanimator, that would tread far closer to the source material, being more grounded in science than Gordon’s more splatstick approach.

Since then, everything seemed to go quiet with the project but this early sales art has now appeared, along with a title change that sees the film now called Herbert West: Reanimator, aligning it more with Lovecraft’s book, lest audiences assume it to be some kind of franchise reboot. 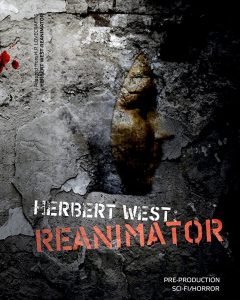 The film is now reportedly in pre-production with Isle Empire Films. Producer/co-writer Johnathon Schaech is reportedly set to play Herbert West, with Levin as his assistant. Brad Dourif and Lin Shaye were previously named as being attached to the project, though it is not known if this remains the case.