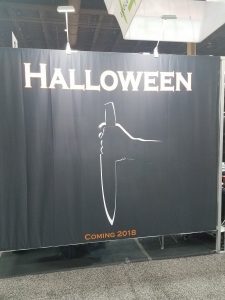 With David Gordon Green and Danny McBride’s new take on Halloween set to start filming in the autumn, we can expect to hear plenty more about it in the coming months. It does seem that a stripped-back return to the stark terror of John Carpenter’s original is on the cards, and the early promo art spotted at the Licensing Expo taking place this week certainly backs this up. The photo (right) comes courtesy of Collider.

Reportedly both a continuation of sorts from the 1978 original and 1981’s Halloween II and a reimagined take on the mythology, the new film is being written by McBride and Green, with the latter to direct. The duo will also executive produce under their Rough House Pictures banner, along with John Carpenter himself, who has also teased the possibility of providing the score. Frustratingly though, this still remains unconfirmed. Malek Akkad (producer on every entry in the franchise since 1995’s The Curse of Michael Myers, including Rob Zombie’s divisive reimaginings) is producing for Trancas with Jason Blum producing for Blumhouse.

Halloween is set to return to the big screen on October 19th, 2018.