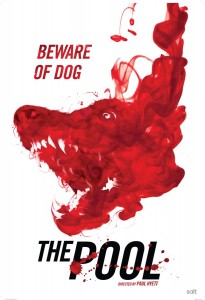 Effects designer Paul Hyett brought us a rather brilliant werewolf flick this year with Howl and now it seems that his next feature will be titled The Pool. The story will follow a pool party which turns deadly when the family’s dog becomes rabid. Where do you think the film-maker has drawn inspiration for this one? Apparently it will be a mixture of Cujo, Paranormal Activity and Jaws, and that’s one hell of a combination we can’t wait to see in action.

Hyett has worked on a number of different films and has been involved in the special effects creation for The Woman in Black, The Descent, The Children and many more. He’s no stranger to creating great monsters and proved that he can combine this experience with directing to create Howl; a successfully scary and visually impressive horror film.

UK outfit Salt are planning to secure deals at the upcoming AFM in the USA, and they previously described the film as follows:
“Hyett draws on classic horrors like Jaws and Paranormal Activity, saying “what elevates a horror into a classic is making the audience terrified of the everyday”.  Using proprietary, never before seen FX, The Pool will be out-and-out action coupled with edge of your seat tension.”

We’re huge fans of Paul Hyett at SCREAM, so watch out for more news on this as it comes.