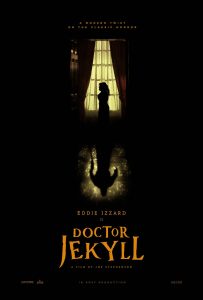 Eddie Izzard (Hannibal, Get Duked!) stars as Doctor Nina Jekyll, and we get our first look at her in the poster, as well as a glimpse of the sinister Hyde. The film will follow Nina as she finds friendship with her newly hired help (Scott Chambers). Together, they must work to prevent Hyde from destroying Nina’s life.

Joe Stephenson directed Doctor Jekyll, which was written by Dan Kelly-Mulhern. The cast also includes Lindsay Duncan (A Banquet), Jonathan Hyde (Anaconda), and Simon Callow (The Phantom of the Opera).

Doctor Jekyll is currently in post-production in the UK.