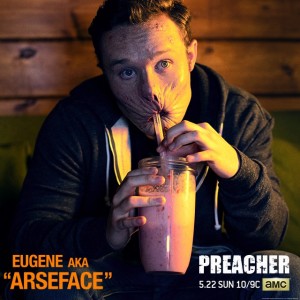 Seth Rogen and Evan Goldberg’s TV adaptation of the graphic novel Preacher has, so far, received rave reviews after its screening at SXSW festival. Critics are praising its profanity, but also, its dark humour and dosage of gore. We’ve had a look at a couple of characters from the show already, and now we have our first look at Eugene AKA Arseface who is as hideous as you’d expect.

If you aren’t familiar with Arseface’s story from the graphic novel, then let us fill you in. The hardcore Nirvana fan tried to commit suicide, but unlike his idol Kurt Cobain, his attempt failed and left him with that awful-looking face deformity.

When speaking about the creation and look of Arseface, Rogen explained that he didn’t want the character to look exactly like he did in the comic, “There had been something online that existed of some test that someone had done that looked exactly like how it looked in the comic, and as soon as I saw that, I knew we should not try to make it look exactly how it looked in the comic, and we should take some license and try to make it something maybe a little more … palatable, I guess might be the word. And we wanted the character to being sympathetic and ultimately, like, someone you really rooted for.” Basically, he didn’t want the poor guy to be too ugly, because otherwise it would be difficult to empathise with him.

Preacher will follow Jesse Custer played by Dominic Cooper (Dracula Untold) who is a supernatural preacher that abandoned his faith only to become paired with an entity called Genesis, who is both an angel and a demon. Along with his ex-girlfriend Tulip (Ruth Negga) and an Irish vampire (Joseph Gilgun) he sets out to, literally, find God and find out why he has abandoned his heavenly duties.

We will leave you with the trailer and a reminder that you can catch Preacher on AMC when it starts airing on Sunday 22nd May at 10pm; right after the Season 2 finale of Fear The Walking Dead.