The first image has been released of Katherine Waterston in the upcoming Alien: Covenant. She is certainly channelling her inner Ripley as she wears a similar vest and short hair-do worm by the iconic heroine played by Sigourney Weaver. 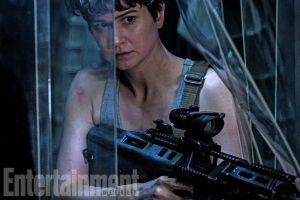 Over on Twitter a few images have been revealed by the film’s official account, with a caption of numbers that have no explanation. Fans have speculated that the numbers are microseconds, which would suggest that we are getting a trailer today (Thursday). Others believe that they relate to the time period of the film and suggest the moment the events are occurring, because both sets of numbers end with 2104; the year that Alien: Covenant is set.

It’s all getting very mysterious and we are begging for a trailer to be released soon, because we’re getting extremely impatient over here.