First Look Image of Michael Myers from HALLOWEEN 2018 is Brilliant

We’ve already seen “The Shape” in the trailer for Blumhouse’s Halloween, which hit the Internet in June, but a high-resolution image has now been released. While it’s no guarantee the film itself will please hardcore franchise fans, it certainly looks like a return to the basic-yet-menacing slasher aesthetic of the late 1970s.

Have a look and we think you’ll agree, Michael Myers looks more than ready to unleash bloody mayhem! 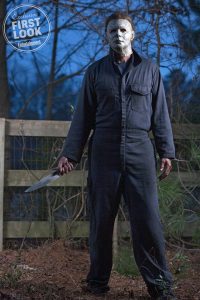 “What I loved is that it surgically excises all of that dead tissue,” Curtis says of the script for the new Halloween, which was written by Danny McBride, Jeff Fradley, and the film’s director, David Gordon Green. “This is growing from just that original movie, 40 years later. There may be people who love the other movies, great — [they have] zero relevance to this story.”

Fans of Jamie Lloyd (played by Danielle Harris) may still feel irked, but time will tell! The fact that the Halloween franchise has becomes something resembling a Choose Your Own Adventure story isn’t lost on many diehard fans. Time will tell if Blumhouse’s reboot hits the sweet spot, or strikes a sour chord.

If you missed it, you can check out the trailer and synopsis for Halloween below. The film arrives in US Theaters on October 19th, just in time to coincide with the 40th Anniversary of John Carpenter’s Halloween, widely considered the spark that ignited the slasher phenomenon. 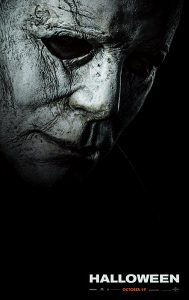 Synopsis:
Laurie Strode (Curtis) comes to her final confrontation with Michael Myers (Nick Castle), the masked figure who has haunted her since she narrowly escaped his killing spree on Halloween night four decades ago.

Halloween is directed by David Gordon Green who co-wrote the script with his frequent collaborator Danny McBride. Besides Curtis and Castle, other cast members include James Jude Courtney, Judy Greer, and Andi Matichak.