FIRST LOOK: HBO’S THE LAST OF US

Filming is currently underway on HBO’s series adaptation of hit horror game The Last of Us, and the franchise’s creator, Neil Druckmann, has shared our first look at Joel (Pedro Pascal) and Ellie (Bella Ramsey)!

“When I first saw them on set in full costumes, I was like: ‘Hooooooly shit! It’s Joel & Ellie!’” Druckmann tweeted along with the picture. 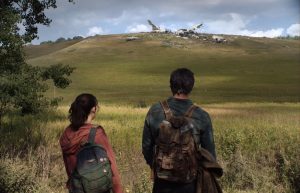 Craig Mazin (Chernobyl) is developing the small-screen adaptation and is working with Druckmann to write and executive produce. Taking place 20 years after modern civilisation has been destroyed, The Last of Us follows Joel, a hardened survivor, who is hired to smuggle Ellie, a 14-year-old girl, out of an oppressive quarantine zone. What starts as a small job soon becomes a brutal, heartbreaking journey, as they both must traverse across the U.S. and depend on each other for survival.