First Look Behind-the-Scenes of The Nun

The first look at Corin Hardy’s The Nun has been eyed online and it shows a foggy location, perfect for the sinister nun to lurk and frighten her unsuspecting victims. 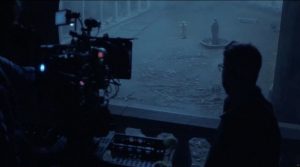 The Nun will follow a priest investigating the suicide of a young nun, immersing him in a terror he could never have imagined. With Corin Hardy at the helm, we’re expecting an atmospheric, chilling edition to The Conjuring franchise. Hopefully the film will follow in the footsteps of the most recent instalment, Annabelle: Creation, by impressing and scaring audiences in equal measure.

The Nun is being directed by The Hallow’s Corin Hardy and the script has been written by The Conjuring/The Conjuring 2 director James Wan and Annabelle/Annabelle: Creation scribe Gary Dauberman. The film will star Taissa Farmiga – the younger sister of The Conjuring’s Vera Farmiga – Demian Bichir, Bonnie Aarons, Charlotte Hope, Jonas Bloquet and Ingrid Bisu.