Check out this first-look image of Thomas Jane (The Mist) and Kara Hayward (Us) in upcoming horror-comedy Slayers, a movie that focuses on—you guessed it—vampire slayers! 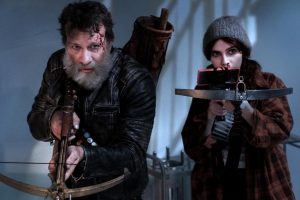 In the film, “Jane plays Elliot Jones, a man who has made it his life’s mission to search for the vampire who murdered his teenage daughter. He finally gets his shot at revenge when he hears that The Stream Team, a group of social media superstars including party girl Jules and Gen-Z pro-gamer Flynn, have got a once-in-a-lifetime opportunity to meet reclusive billionaire Beverly Rektor at her vacation compound.

“When the group discovers Rektor has not planned an evening of fun and descends from a long line of vicious blood-suckers, they must fight for their lives inside her house of horrors. Can Jones save the day?”

Abigail Breslin (Zombieland), Malin Akerman (The Final Girls), and Lydia Hearst (The Haunting of Sharon Tate) star alongside Jane and Hayward in the film, which was directed by K. Asher Levin, who also co-wrote the screenplay with Zack Imbrogno. Highland Film Group is selling Slayers globally at the virtual American Film Market next month, with The Avenue (its domestic distribution arm) handling the film’s US release, targeted for 2022.