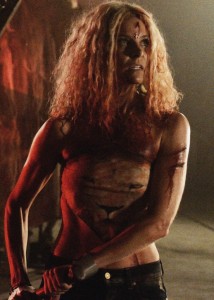 If you’re terrified of clowns then Rob Zombie’s upcoming clown-filled endeavour 31 is probably not for you, or maybe it is. Whether you love him or hate him, you can’t deny that Zombie’s films are filled with a certain flair and fear that not many directors can achieve.We’ve had already had a look at Schizo-Head and Father Murder, but now we are given the chance to see what Zombie’s wife Sheri Moon will get up to. The image shows her character Charly looking a bit peeved and if the synopsis is anything to go by, she has the right to be. The sinister game she’s been involved in doesn’t seem to have taken its total toll yet, however, as she’s still got a weapon in hand. You go girl!