Rob Zombie has been steadily sharing production updates from his upcoming film version of The Munsters over on Instagram, including the building of the family’s iconic home, 1313 Mockingbird Lane. This week, he’s given us our first look at some of the cast in costume sitting in front of the now-completed mansion!

The picture features Jeff Daniel Phillips as Herman Munster, Sheri Moon Zombie as Lily Munster, and Daniel Roebuck as Grandpa Munster. The look of the characters seems fairly faithful to the original series, which ran from 1964 to 1966. 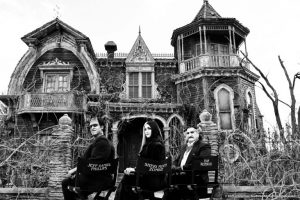 Rob Zombie is directing the feature film for Universal Home Entertainment. No word of a release date just yet.