One of the most interesting Netflix Originals coming to the streaming service in July is a spooky comedy mockumentary called Frankenstein’s Monster’s Monster, Frankenstein. (No, that’s not a typo.) 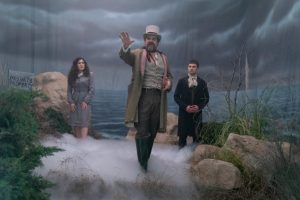 Described as an “over-the-top and often dramatic(ish) reimagined tale of mystery and suspense,” Frankenstein’s Monster’s Monster, Frankenstein follows David Harbour (Stranger Things, Hellboy) as he discovers lost footage from his father’s televised stage play of the same name. Alfred Molina, Kate Berlant, and other special guests will also appear in the mockumentary, which was directed by Daniel Gary Longino and written by John Levenstein.