Neil Marshall (The Descent, Dog Soldiers) is traveling back in time for his new horror film The Reckoning, which is set during England’s great plague of 1665.

Centring around the witch hunts that were rampant during the era, the film follows Grace Haverstock (Charlotte Kirk), a young woman widowed after the suicide of her husband Joseph (Hannibal’s Joe Anderson). As if that wasn’t bad enough, Grace is falsely accused of being a witch after she rejects the unwanted advances of her landlord Squire Pendleton (Steven Waddington).

Sean Pertwee (Dog Soldiers) stars as Judge Moorcroft, England’s most ruthless witch-hunter. But even as Grace endures Moorcroft’s physical persecution, the Devil (Ian Whyte) starts to work his way into her mind, forcing her to square off against her own inner demons.

Kirk and Marshall co-wrote the film with Edward Evers-Swindell. Will this be a return to form for Marshall after the disappointing Hellboy? Take a look at the first image and let us know what you think! 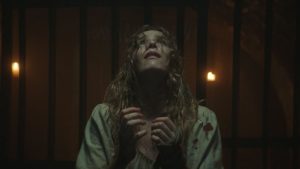