Author Grady Hendrix’s 2016 horror novel My Best Friend’s Exorcism is getting a film adaptation, and we’ve got a first-look image to share with you! 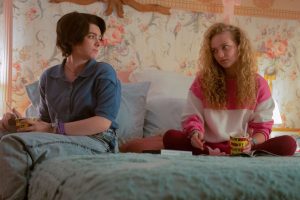 Elsie Fisher (Texas Chainsaw Massacre) and Amiah Miller (War for the Planet of the Apes) star in the film, which is debuting on Amazon Prime Video on the 30th of September. The cast also includes Cathy Ang and Rachel Ogechi Kanu.

“The year is 1988. High school sophomores Abby and Gretchen have been best friends since fourth grade. But after an evening of skinny-dipping goes disastrously wrong, Gretchen begins to act… different. She’s moody. She’s irritable. And bizarre incidents keep happening whenever she’s nearby. Abby’s investigation leads her to some startling discoveries—and by the time their story reaches its terrifying conclusion, the fate of Abby and Gretchen will be determined by a single question: Is their friendship powerful enough to beat the devil?”

Damon Thomas (Penny Dreadful) directed My Best Friend’s Exorcism from a script by Jenna Lamia, who is also an associate producer on the project. Christopher Landon (Freaky) is producing.